Courtney, a Greater Cleveland native came into the event seeded number two, she struggled a little in the pools where she split her bouts 3-3, finishing 2nd in her pool and 37th overall. 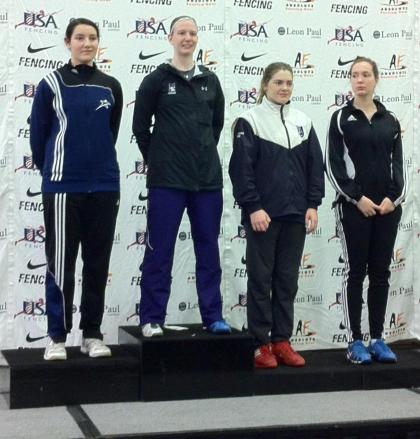 Courtney's first direct elimination bout was against Alissa, Hofmann where she defeated her 15-5.
In the round of 32, Courtney fenced and defeated Vivian, Rand 15-7.
To get in top eight, she defeated Alexandria, Micek 15-9
To medal and enter in top 4 she fenced Jennifer Horowitz and won the bout 15-8.
In the semi-finals, Coutney fenced Mason, Speta and won the bout 15-8.
For the Gold & USA National title she fenced Sofya, Tkachman. After the first period Courtney was up 5-2, 11-8 in the second and won the bout in the 3rd and final period 15-11

Courtney had a great 2013 fencing season, as a sophomore at Northwestern University she finished ninth in women's epée at the 2013 NCAA Championships on March 24 and earned an All-America honor.

In May 2013 she competed in her first Senior Épée World Cup in Rio de Janeiro, Brazil where she was edged 14-15 by USA teammate Lindsay Campbell and finished 77th.

Courtney will be representing the United States at the World University Games in Kazan, Russia next Sunday, July 7th.